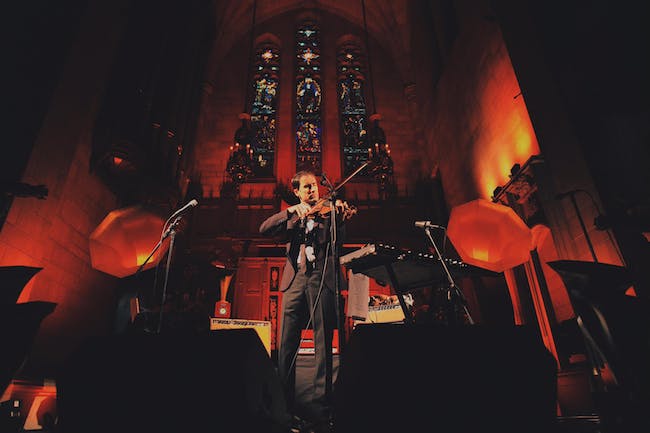 Andrew Bird will reprise his annual “Gezelligheid” concerts this winter with a live stream performance on Sunday, December 13th. Appropriating a Dutch term that loosely translates to “cozy,” the Gezelligheid performances concentrate mainly on instrumental violin pieces amplified only by Bird’s signature giant Victrola horns. Included with each ticket is an archival stream of the 2013 Gezelligheid performance, live from the Fourth Presbyterian Church in Chicago that will be available to view on or before the live stream on December 13th.

Andrew Bird is an internationally acclaimed musician, songwriter and composer who has released fifteen records to date. Recording and touring extensively, Bird has performed around the world at festivals and renowned institutions including Carnegie Hall, Sydney Opera House and Walt Disney Concert Hall. A TED Talks presenter, a New Yorker Festival guest, and an op-ed contributor for the New York Times, Bird debuted on the cast of Fargo’s fourth installment on FX this fall. Bird's latest album, My Finest Work Yet, was nominated for “Best Folk Album” at the 2020 Grammy Awards.

• The Seated team handles all customer support before, during and after the stream.