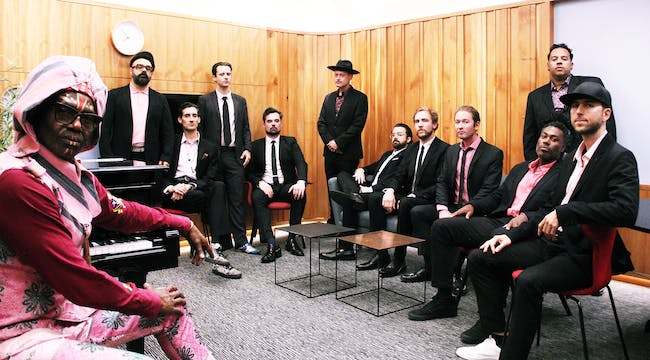 It’s hard to believe that more than twenty years have passed since Antibalas’s humble beginning as a neighborhood dance / protest band in the block parties and underground parties in pre-gentrified Williamsburg, Brooklyn. Over the past two decades they have evolved into what The Guardian called “one of the world’s finest Afrobeat bands” while enjoying equal renown for their cross-genre collaborations with legends of popular music. With a heavy balance of experience and new blood, the group leaps into 2020 with their new Daptone Records full-length “Fu Chronicles.”

In 1999, Perna and Roth dropped in at an atelier / dojo belonging to Duke Amayo. They invited him to a neighborhood concert and then reached out to him later as an emergency substitute for a show. Amayo soon became a fixture in the group, first on percussion, then later on vocals, vibraphone, and keyboards and moving to center stage as the group’s frontman and creating the Afro-Spot, the band’s headquarters as well as the home of the first Daptone Records studio.

Over the next few years, the band performed several times a month throughout NYC at the Afro-Spot, at benefits, lofts, block parties, and at their Lower Manhattan weekly residency called “Africalia” with regular appearances by friends including Sharon Jones, Lee Fields, and The Sugarman Three. After their second release, “Talkatif” (2002, Ninja Tune), the group began touring heavily throughout North America and Europe including performances at Glastonbury, Montreux Jazz Festival, Coachella, Bonnaroo, and the Newport Jazz Festival. Over the years, expanded their travels to Australia, New Zealand, Japan, South America, and most recently, Hong Kong.

In the late 2000s, after nearly ten years of road touring, Antibalas was chosen by choreographer Bill T Jones, to serve as the band for the Tony-award winning Broadway musical “Fela.” Around the same time, the band began to draw the attention of the Roots. The two groups joined with Public Enemy to perform a live version of the entire “It Takes a Nation of Millions to Hold us Back” at the 2009 Roots Picnic as well as the Red Bull Battle of the Bands, as well as numerous guest appearances on Late Night with Jimmy Fallon.

Over the years, different members have traded production and composition duties from album to album. On the new album—“Fu Chronicles”—Amayo leads us through a thrilling sonic journey of kung fu meets Afrobeat, weaving together the strands of Edo and Yoruba cultural memory from Nigeria with his training and study in Chinese martial arts.

Recorded in the Summer of 2018, over seventeen musicians and singers crammed into the storied Daptone House of Soul in Bushwick to record the massive body of work. With live versions and arrangements stretching up to thirty minutes, Perna, Amayo, and Roth worked tirelessly to preserve the hypnotic power of the long-form live arrangements into six concise and powerful album tracks. 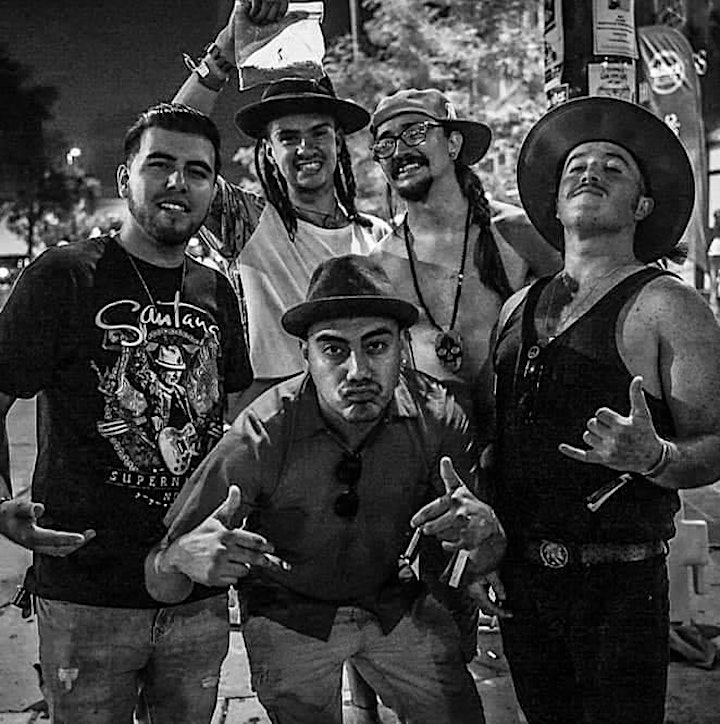 Los Mocochetes are a Xican@ Funk band from Denver, CO. This colorful cast of characters fuses thoughtfully brazen, socio/politically charged song lyrics, groovilicious melodies and high-energy stage antics to create an immersive experience unlike anything you've ever seen before. Much like a machete, which can be used either as a tool to build or a weapon to kill, they have chosen to use their music to inspire and encourage positive social change. Every show is different, but it’s always a dance party!

The current lineup features artists with a wide variety of influences. They are poets, singers, painters, rappers, actors, musicians, dancers, producers, composers, dreamers, doers, thinkers. They are gente who make music together and enjoy all forms of creativity. The Mocochetes are here to ignite a fire in every audience member to enjoy the moment and then go out and make a difference!