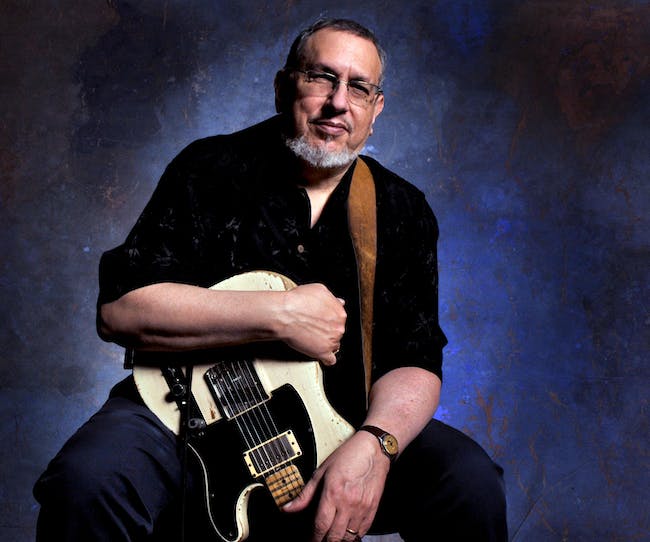 “The reason man created stringed instruments. David touched them with a lover’s fingers and they moaned that true love right back at him. Wood and wire and flesh spoke.”

Summer 2013: record heat wave, prolonged economic slump, music business under frontal assault. A bonafide legend could be forgiven for wanting to coast a bit or ride off into the sunset, but that’s not how this narrative goes: ladies & gentlemen, allow us to re-introduce David Bromberg, the Godfather of Americana, and his new album Only Slightly Mad, which will be released by Appleseed Recordings on September 24th.

Bromberg was born in Philadelphia in 1945 and raised in Tarrytown, NY. “As a kid I listened to rock ’n’ roll and whatever else was on the radio,” says Bromberg. “I discovered Pete Seeger and The Weavers and, through them, Reverend Gary Davis. I then discovered Big Bill Broonzy, who led me to Muddy Waters and the Chicago blues. This was more or less the same time I discovered Flatt and Scruggs, which led to Bill Monroe and Doc Watson.”

David began studying guitar at age thirteen and eventually enrolled in Columbia University as a musicology major. The Greenwich Village folk scene in the mid-’60s drew David to the downtown clubs and coffeehouses, where he could watch and learn from the best performers, including primary sources such as his inspiration and teacher, the Reverend Gary Davis.

Bromberg’s sensitive and versatile approach to guitar-playing earned him jobs playing the Village “basket houses” for tips, the occasional paying gig, and employment as a backing musician for Tom Paxton, Jerry Jeff Walker and Rosalie Sorrels, among others. He became a first-call, “hired gun” guitarist for recording sessions, ultimately playing on hundreds of records by artists including Bob Dylan (New Morning, Self Portrait, Dylan), Link Wray, The Eagles, Ringo Starr, Willie Nelson, and Carly Simon.

An unexpected and wildly successful solo spot for 600,000 concert goers at the 1970 Isle of Wight Festival in Great Britain led to a solo deal with Columbia Records, for whom David recorded four albums. His eponymous 1971 debut included “The Holdup,” a songwriting collaboration with former Beatle George Harrison, who also played slide guitar on the track. David also met the Grateful Dead and wound up with four of their members playing on his next two albums.

Bromberg’s material, based in the folk and blues idioms, continually expanded with each new album to encompass bluegrass, ragtime, country and ethnic music, and his touring band grew apace. By the mid-’70s, the David Bromberg Big Band included horn players, a violinist, and several multi-instrumentalists, including David himself.

Despite sold-out concerts and a string of acclaimed albums on the Fantasy label, Bromberg found himself exhausted by the logistics of the music business. “I decided to change the direction of my life,” he explains. So David dissolved his band in 1980, and he and his artist/musician wife, Nancy Josephson, moved from Northern California to Chicago, where David attended the Kenneth Warren School of Violin Making. Though he still toured periodically, the recordings slowed to a trickle and then stopped.

After “too many Chicago winters,” in 2002 David and Nancy were lured to Wilmington, Del., where they became part of the city’s artist-in-residence program and where David could establish David Bromberg Fine Violins, a retail store and repair shop for high quality instruments. Frequent participation in the city’s weekly jam sessions helped rekindle Bromberg’s desire to make music again, as did the encouragement of fellow musicians Chris Hillman (The Byrds, Desert Rose Band, Flying Burrito Brothers) and bluegrass wizard Herb Pedersen.

With the release of the Grammy-nominated ‘Try Me One More Time,’ his 2007 solo return to the studio, David continued his musical revitalization, playing shows on his own, with the David Bromberg Quartet, and reunions of the David Bromberg Big Band. In 2009, spurred by a suggestion from John Hiatt that he come to Hiatt’s Nashville studio to “mess around,” David came up with the idea for ‘Use Me’ – an album featuring David with Hiatt and other friends like Levon Helm, Los Lobos, Tim O’Brien, Vince Gill, Widespread Panic, Dr. John, Keb’ Mo’ and Linda Ronstadt. Each guest artist either wrote or selected a song and then produced David’s interpretation of their suggested tune, thereby fulfilling David’s request to ‘Use Me’. Partially detailing the proceedings, filmmaker Beth Kruvant directed a compelling film documentary David Bromberg; Unsung Treasure, which is currently circulating at US and Canadian film festivals.

In 2013, content with the balance of both his violin business and performing career, David was ready to record again with his live band. Enlisting old friend Larry Campbell (three-time Grammy-winning producer for Levon Helm and multi-instrumentalist with Bob Dylan) and engineer Justin Guip, David and his group entered Levon Helm Studios in Woodstock, NY, in March 2013. Enlisting some of Helm’s former recording and touring musicians for added instrumentation, the David Bromberg Band emerged twelve days later with ‘Only Slightly Mad,’ a return to his genre-bending albums of the Seventies and Eighties. Bromberg fans will find blues, bluegrass, gospel, folk, Irish fiddle tunes, pop and English drinking songs happily coexisting as they can only on a Bromberg album. For newcomers, Only Slightly Mad will be an introduction to an astonishing performer whose range and musical depth have delighted devoted audiences for over forty years and will for many years hence. 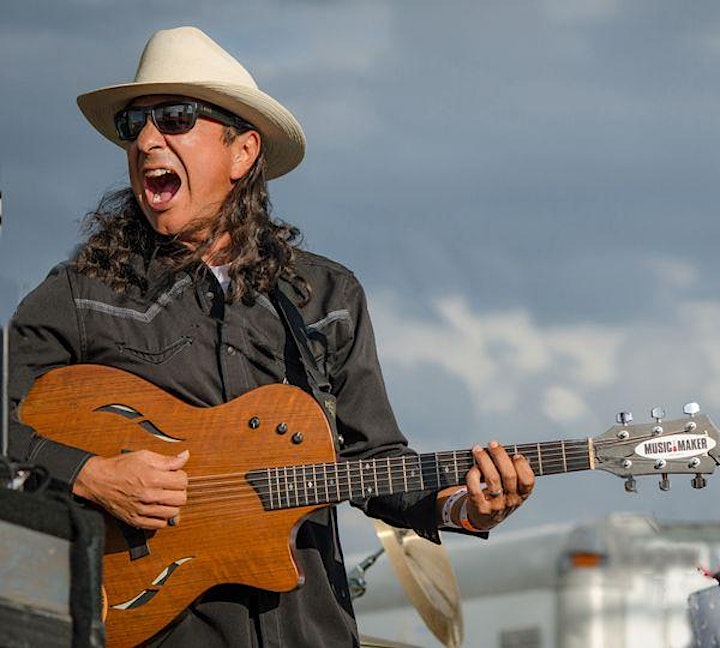 Described as “one of the best acoustic pickers on the scene today,” Cary Morin brings together the great musical traditions of America and beyond like no other. With deft fingerstyle guitar and vocals that alternately convey melodic elation and gritty world-weariness, Morin crafts an inimitable style often characterized as acoustic Native Americana with qualities of blues, bluegrass, jazz, jam, reggae, and dance.‘Cary Morin is a unique and brilliant guitar player, songwriter and singer, ‘ says renowned folk musician David Bromberg, extolling the virtues of one of his favorite players. ‘It’s hard to pick out what he does best. As a guitar player, I have huge respect for Cary’s style and technique on the guitar. If you haven’t heard him yet, you should. Try to remember that it’s only one guitar.’ “ - Dan Forte for Taylor Wood & Steel Magazine, June 2018. Morin’s sixth release, When I Rise, follows close on the heels of an international tour that spanned the U.S. and reached as far as Italy, France, and Germany.

Crow tribal member and son of an air force officer, Morin was born in Billings, Montana. He spent the bulk of his youth in Great Falls, where he cut his teeth picking guitar standards at neighborhood get-togethers, before relocating to Northern Colorado. There, his musical career hit the ground running with The Atoll, a band he founded in 1989 and that toured nationally, gaining a devoted following. Later, he achieved international acclaim with The Pura Fé Trio, for whom the single “Ole Midlife Crisis,” which Morin wrote and performed with Pura Fé, placed at number 17 on France’s iTunes blues chart. With The Atoll and The Pura Fé Trio, and as a solo artist, Morin has played celebrated venues across the globe, including Paris Jazz Festival, Winter Park Jazz Festival, Folk Alliance International, River People Festival, Shakori Hill Festival, the 2010 Vancouver Olympics, and most recently Rochefort En Accords festival in France and The Copenhagen Blues Festival.

Morin’s stage credits also include Tribe at the Celebrity Theater in Phoenix, and co-authorship of Turtle Island, a 50-member production that played two consecutive years to sold-out audiences in Northern Colorado. With the Red Willow Dancers, he was a guest of the internationally renowned Kodo Drummers, performing at their 1998 Spring Festival and additional dates in Japan. He has produced or performed on over 18 recordings, and has toured across the US, as well as Japan, France, Germany, Italy, Switzerland, Spain, Belgium, Denmark, and the UK. Morin’s performances have reached millions on national TV in Japan, France, and the UK, as well as on national radio in the US (NPR’s Beale Street Caravan), UK (BBC’s Whose London), France (RFI), Switzerland, and Belgium. Cary has won numerous awards for his work, particularly for his 2017 release, Cradle to the Grave. He is the recipient of the 2018 Independent Music Awards for Best Blues CD (Cradle to the Grave), a 2018 International Songwriting Competition Honorable Mention for Cradle to the Grave, a 2018 Native Arts and Cultures Fellowship, a 2017 First Peoples Fund Artist in Business Leadership Fellowship, the 2017 Indigenous Music Awards for Best Blues CD (Cradle to the Grave), 2015 Indigenous Music Awards Nominee for Best Folk Album (Tiny Town), 2014 Indigenous Music Awards Nominee for Aboriginal Entertainer of the Year, 2013 & 2014 Colorado Blues Challenge Solo Championship, and a 2013 Lifetime Achievement Award from the Fort Collins Music Association (FoCoMA) and won the Colorado Fan Favorite Poll in the blues category for his second solo release, Streamline.