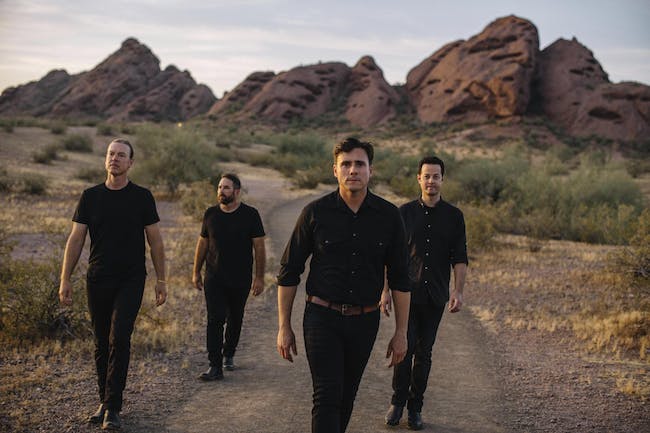 Jimmy Eat World today announce details of their 10th studio album Surviving, released on 18th October via The Orchard / RCA Records. The acclaimed Arizona four piece also reveal the first dates of Surviving, The Tour as well as a run of intimate UK shows for the week of album release.

Surviving is the band’s most personal, ambitious album to date and front man Jim Adkins once again proves himself as one of the most prolific songwriters in rock & roll.

As Adkins himself puts it, “Surviving explores some of the different kinds of weights my ego tells me I have to carry, what I see people around me choosing to carry and what I have found to be the truth when I choose to let go”.

Unveiled today, lead single “All The Way (Stay)” extolls the virtues of letting people discover the real you while exposing your vulnerabilities. As a heady rush of guitars give way to an irresistible middle-eight, Rachel Haden’s backing vocals and a saxophone solo lifted from the soundtrack of the-greatest-80’s-movie-John Hughes-never-made, ‘All The Way (Stay)” showcases the restless creative energy of a band at the peak of their powers.

The band also released a newly recorded version of ‘Love Never’. Originally released last year as a limited edition vinyl-only single, ‘Love Never’ pits the realities against the expectations of love, a classic slice of Jimmy Eat World wrapped up in a three minute rush of towering guitars and crashing drums.

The 10-track album, which was produced by the band and Integrity Blues producer Justin Meldal-Johnsen, is available for pre-order now. An exclusive white colored vinyl will also be available through Independent Record Stores and www.jimmyeatworld.com. Additional merch bundles can also be found on the band’s site.

Surviving is a timely reminder of just why Jimmy Eat World are still selling out venues, headlining festivals and scoring top 10 albums as new generations of fans adopt their songs as the soundtrack to their lives. 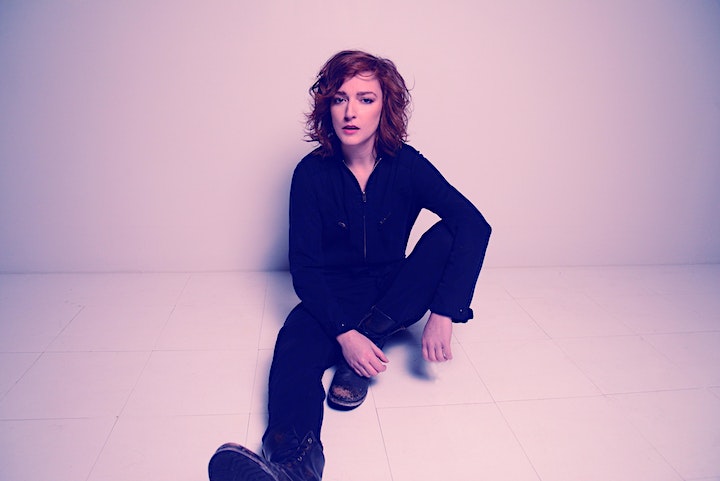 When you turn on pronoun’s 2019 full-length debut, i’ll show you stronger [Rhyme & Reason Records], you’ll be met with a barrage of fuzzy guitars, thick bass lines, airy synths, and D.I.Y. production. The first inclination would be to attribute this sonic groundswell to a full band of five, four, or (at least) three musicians tuned in and cranked up to ten (maybe even louder).

However, it all comes from the mind, heart, and spirit of one-woman: Alyse Vellturo.

With rudimentary knowledge of production, the artist personally recorded and produced these twelve tracks alone in her tiny apartment, achieving an all-encompassing sound she deems, “indie-emo-bedroom-rock-that no-one-asked-for.” Living up to the title i’ll show you stronger, a series of serendipitous events empowered her to realize the strength behind this body of work.

It doesn’t just represent a lifetime dedicated to writing and performing music come full circle, but it also represents a bright spot following a trio of tumultuous years.

“The album is sort of about everything working out and falling into place,” she says. “I abandoned the idea of being an artist when I stepped foot in to Berklee College of Music and discovered how mediocre I was compared to the rest. This led me to production and engineering of other artists, but slowly realized more and more studios were closing and I didn’t feel like cleaning bathrooms and doing lunch runs for a year. Which lead me in to the business side of working in management and at record labels. I thought I had found my calling but over a decade past me giving up I decided to start my own music project from a very vulnerable place. All my experiences before started to make sense and fall in to place.”

The project started to materialize as early as 2015 with her debut EP as pronoun, There’s no one new around you. Enduring “a horrible breakup,” she refocused on her artistry and wrote this initial body of work in between day jobs in the industry. Upheld by her production, instrumentation, and voice, pronoun attracted widespread critical acclaim from the likes of the New York Times, Boston Globe, NPR, The Line of Best Fit, and many more. Highlights—“just cuz you can’t” and “a million other things”—both eclipsed 1 million Spotify streams and counting. Additionally, she opened for the likes of Justin Courtney Pierre, Citizen, and Basement, to name a few.

Along the way, she spent intermittent spells working diligently in that apartment on what would become i’ll show you stronger, picking up where the EP left off both lyrically and musically. For the first time, she incorporated live drums, asking some favorite drummers to breathe life into the grooves.

To preview the full-length in 2018, she unveiled the three-song collection you didn’t even make the bed. Its leadoff single “run” also leapt past the 1-million-mark on the streaming platform. Stereogum notably described the latter as “a monster of a track.” Strikingly, the new music also harked back to formative emo influences such as Dashboard Confessional.

“The EPs are a little more like lo-fi bedroom pop,” she goes on. “As I went on tour and met who was listening to me, I realized there’s a strong influence from the emo/alternative/rock world in what I do. There are angsty lyrics and melodic guitars, but there’s more to it as well. I’ve been able to understand myself so much more since starting pronoun.”

Her personal understanding deepens on i’ll show you stronger. Including the suite of tunes from you didn’t even make the bed, the record speaks to themes of persevering in the face of obstacles such as heartbreak and limitations. She proves herself to be “stronger” through and through.

“This is the aftermath of the breakup,” she admits. “The EP was like the first stage. You’re trying to figure out what’s going on and get used to things. Afterwards, you finally realize, ‘You know what? I deserve better. I’m going to overcome everything and come out ok on the other side’.”

That confidence courses through the upbeat first single “stay.” Touting garage rock guitars, it gives way to a sweeping, yet sweet harmony during the hook. “stay’ actually pre-dates pronoun,” she says. “When I was making music as a kid for fun, it started out as a love song. It’s about what’s happening as you’re going through a breakup. It’s the first realization you’re not going to work out together. I decide I’m going to stay.”

Meanwhile, “everybody knows” concludes the album with glimmering harmony punctuated by confident gusto and a hypnotic hum. “It’s important to me, because it’s all a step-by-step process of what I’m dealing with,” she continues. “The final song is a reminder, ‘It’s alright, so enough bitching about this relationship forever. It’s time to move on’. It’s the nail-in-the-coffin on that chapter. I’m turning the page.”

Personal themes thread it together. “It’s overall about frustration,” she states. “Although what I was frustrated about when I wrote it passed, I hope people can still relate to it whatever frustrations they’re feeling in their lives.”

In the end, pronoun embodies Alyse through and through, and all of her talents shine on i’ll show you stronger.

“I hope I’ll show you stronger can give listeners some relief—and maybe the songs get stuck in their heads,” she leaves off. “It’s relevant to so many things. Mostly, it’s about fixing a situation and emerging as a stronger person.”

There will be NO BACKPACKS allowed inside the venue at this show.