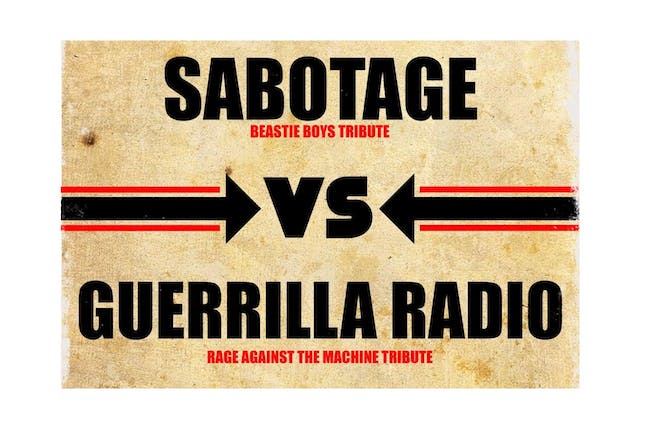 The current holder of the International Party Belts, with talent from all across the local music scene, Sabotage is sure to make everyone get up and dance! Sabotage brings together musicians from 20XIII, The Nu Classics, Pretty Noise and Qbala Music, and their respective backgrounds help them to vividly re-create the blend of Hip Hop, Rock and Funk that made the Beastie Boys one of the most respected groups of the last few decades.

For Guerrilla Radio, we have local artists from all over the Fort Collins/Denver music scene that came together to pay tribute to the righteous band of our generation, and to continue the movement of awareness and consciousness through music. Popular for their high energy sets and hard-hitting, accurate renditions. Currently holding the title belts for Leftapalooza and the FoCoMA Tribute Championship, they're sure to bring the hard hitting energy to the stage.

Are you ready? I said, Northern Colorado music fans, are you ready!? Let's get ready to ROCK! YOU will crown the Tribute Kings of Fort Collins. Don't miss this opportunity!

The evening will include the Mega Dance Party, Kevin Bacon-off, Prize & Ticket Giveaways, a Costume Contest AND Comedians!